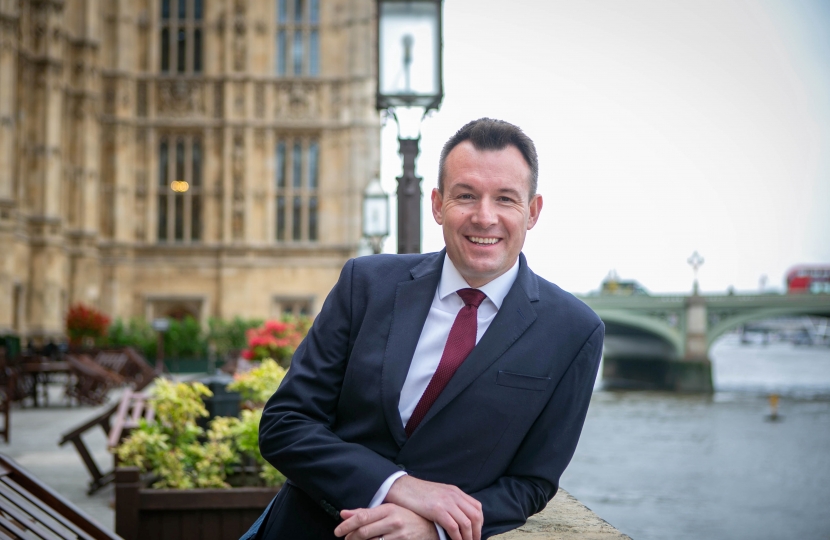 Stuart Anderson is the Member of Parliament for Wolverhampton South West, who was elected at the 2019 General Election. In Parliament, he is a member of the influential Defence Select Committee, the UK delegation to the NATO Parliamentary Assembly, and the Committee for Arms Export Control. Stuart is also Vice-Chair of the APPGs on the Black Country Economy.

Stuart is married with five children and lives in the constituency, which he is proud to represent. Much of Stuart’s work is focused on his constituency, where he is working to deliver on priorities identified from extensive engagement with his constituents, as set out at www.stuartanderson.org.uk/myplan.

In Wolverhampton, Stuart is also member of the Towns Fund Board, a consortium of elected leaders, local businesses, and key partners which secured £25 million to support transformative projects such as the City Learning Quarter, the National Brownfield Institute, and the Grand Theatre expansion project. Since 2019, Stuart has helped to secure over £1 billion funding for the city, which is listed at www.stuartanderson.org.uk/investment-and-fundraising-tracker. This includes £20 million for a new City Learning Quarter and £15 million from the Future High Streets Fund to revitalise local commercial areas. Stuart was also a key driving force behind getting the Government to set up a dual headquarters for the Department for Levelling Up, Housing and Communities in Wolverhampton and part of the Commonwealth Games held at Wolverhampton's West Park.

Before entering politics, Stuart served in the Armed Forces from the age of 17. Just days before his eighteenth birthday, he suffered a high-velocity gunshot wound to the foot and then told that his foot and possibly his lower leg would have to be amputated. The weeks of surgery went better than expected and he undertook an extensive rehabilitation programme which enabled him to return to active service within a year in Northern Ireland. He went on to complete eight years in the Royal Green Jackets (now the Rifles). After leaving the Forces, Stuart worked in the defence and security sectors, operating in over 50 locations around the globe. For over 15 years, he served his community and different charities, from fundraising for underprivileged children to serving at homeless shelters. In 2017, Stuart was elected as a local councillor, gaining a large majority in a seat never held before by the Conservatives.

In his spare time, Stuart is a keen runner and loves ultra-running in the mountains. In 2021, he undertook the Dragon’s Back Race in Wales, the world’s toughest mountain challenge, where he raised over £5,000 for two charities: The Good Shepherd and the Elysium Memorial Foundation for veteran suicide.

Read Stuart's story, as reported by the Times, here.