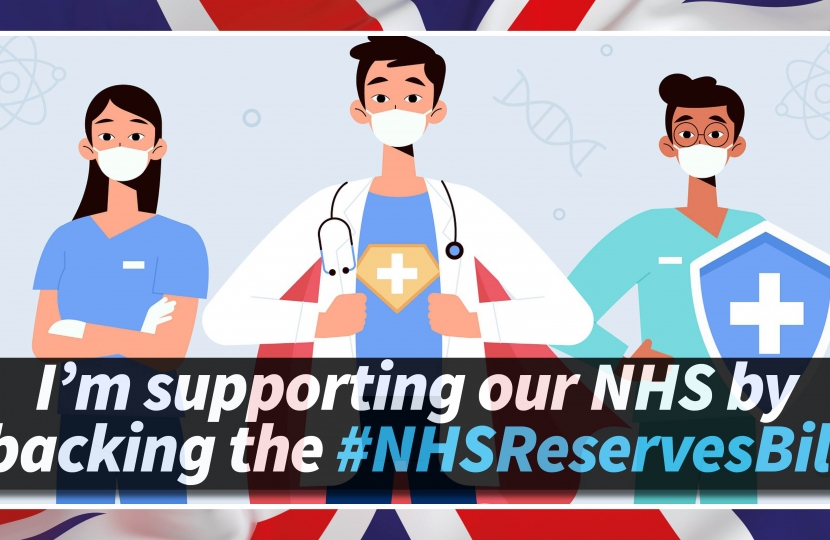 Local MP Stuart Anderson is backing a law in Parliament to create a new system of volunteer reservists for the NHS, modelled on Armed Forces reservists and police special constables.

The NHS Reserve Staff Bill is being presented in Parliament on Tuesday, the 24th of November 2020, backed by Health Secretary Matt Hancock and will benefit our area when the system is up and running.

Local MP Stuart Anderson is backing the new law proposed by Parliamentary colleague Alan Mak MP as the Bill starts its passage in the House of Commons.

The Bill proposes a new, uniformed standing reserve of clinical and non-clinical volunteers which NHS hospitals, health trusts and other Health Service bodies can call upon when staffing demands increase. Scenarios where NHS Reservists could be called up include public health emergencies, seasonal increases in demand, large public events and protests, industrial action, and critical incidents such as terrorist attacks or major accidents.

Department of Health & Social Care figures indicate 47,000 former healthcare professionals (including retired doctors and nurses) volunteered nationally to help the NHS during the Coronavirus outbreak, with another 750,000 non-clinical volunteers signing up online via the GoodSam app. NHS figures show that around 18,000 of the clinical returners are interested in a longer-term role, such as joining the NHS Reserves.

The new law would harness this strong public desire to support the Health Service beyond the Coronavirus outbreak by creating a new, permanent NHS Reserves system to provide a formal bank of trained and vetted volunteer staff to support NHS hospitals and Trusts during periods of high demand for staff, supplementing (but not replacing) the NHS’s permanent staff.

NHS England is currently putting in place pilot schemes in all seven Health Service regions across England, including our region, to explore how the new Reservists system could operate in practice, including in the Wolverhampton South West Constituency. Reservist disciplines would range from clinical roles such as doctors, nurses, healthcare assistants and carers to non-clinical roles such as drivers, electricians, logistics specialists, IT experts and communications professionals.

A new national NHS Reservists Register would be created to capture details about volunteers and their skills, including those from the Wolverhampton South West Constituency. NHS Trusts, hospital chief executives and other healthcare bodies would be able to access the Register to call-up Reservists with the skills needed at the time.

Local MP Stuart Anderson said: “The new NHS Reserves system will benefit Wolverhampton and enable local people to volunteer their time and skills to help our local hospital, GPs, and pharmacies. I’m delighted to be backing this important new law in Parliament to support our Health Service. The pandemic has shown how much people love our NHS and how ready they are to support the Health Service when times are tough, so I hope local people will consider becoming NHS Reservists when the system is ready.”

Alan Mak MP, the Bill’s author who came up with the NHS Reserves idea, said: “Stuart is a strong NHS supporter locally and in Westminster, so I’m delighted to be backed by such a dedicated colleague to create the NHS Reserves. NHS Reservists will benefit the Health Service across the Wolverhampton South West constituency and Stuart will be an outstanding NHS Reserves Champion locally, promoting the new system and encouraging residents to become Reservists. I could not be more grateful for Stuart’s help in getting the NHS Reserves off the ground.”

Matt Hancock MP, Secretary of State for Health and Social Care, said: “Hundreds of thousands of people have selflessly volunteered to support our NHS during the Coronavirus pandemic, bringing out the very best in us all to help our communities and our country at this difficult time. I want us to build on that incredible collective achievement, and Alan Mak’s proposal for an NHS Reserve force is a brilliant opportunity to make this happen. I strongly support him in his efforts to bring this to bear.”