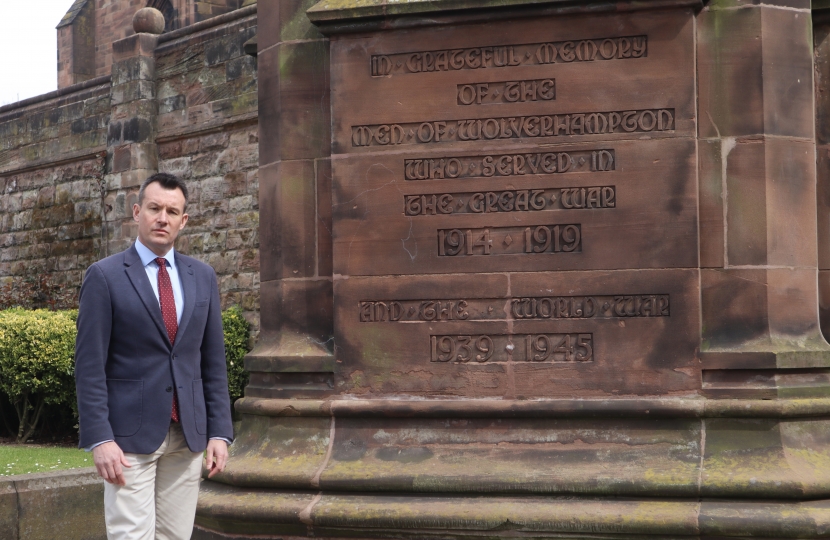 Stuart Anderson MP has celebrated Armed Forces Day, an annual event that takes place each June to pay tribute to the dedicated efforts and hard work of defence personnel, veterans, reservists, cadets, and their families. The celebrations begin with flags being raised on top of buildings and famous landmarks around the country. Stuart was honoured to be invited by the Speaker of the House of Commons to attend Parliament’s Flag Raising Ceremony in Westminster. It took place on Monday, the 21st of June.

Stuart has now called on his constituents across Wolverhampton to join in the celebrations, which lead up to an event being held in Wolverhampton’s very own West Park. The event, being organised by veterans with the City of Wolverhampton Council, is a free, family-fun event with entertainment and exhibitions. Tickets have been issued on a first-come, first-serve basis. Those unable to attend can still salute our forces by taking part in online activities, stopping to think about the sacrifices made by defence personnel and their families, and thanking friends and relatives who are or have been members of the Armed Forces.

In Parliament, Stuart has been championing the Armed Forces. As a veteran, Stuart has spoken about some of the experiences which he has had on active service and its impact on him. He has served on the Committee for the Armed Forces Bill and continues to be an active member of the Defence Select Committee, having recently published a report which found that the Armed Forces had contributed at all levels during the outbreak of COVID-19 since March 2020.

On his website, Stuart has curated a support page with details about who veterans and service-leaders can turn to for help when it comes to things such as housing, education, and healthcare: https://www.stuartanderson.org.uk/support-veterans. He has also thanked local businesses and organisations which have signed up to the Armed Forces Covenant, a promise by the nation to ensure that those who serve or who have served in the Armed Forces, and their families, are treated fairly in accessing public services in wider society. He wants to see many more groups sign the Covenant, which can be found online at: www.armedforcescovenant.gov.uk.

Stuart Anderson MP said: “Armed Forces Day is an important opportunity to give thanks to those who have proudly served to keep our country safe. As a veteran, it is a particularly poignant occasion and I was honoured to join the Speaker of the House of Commons at the Flag Raising Ceremony. It brought into focus the incredible friendships and life-changing experiences I gained on active service. They have shaped who I am today. In my role as an MP, I hope to honour their legacy and ensure they are supported.”