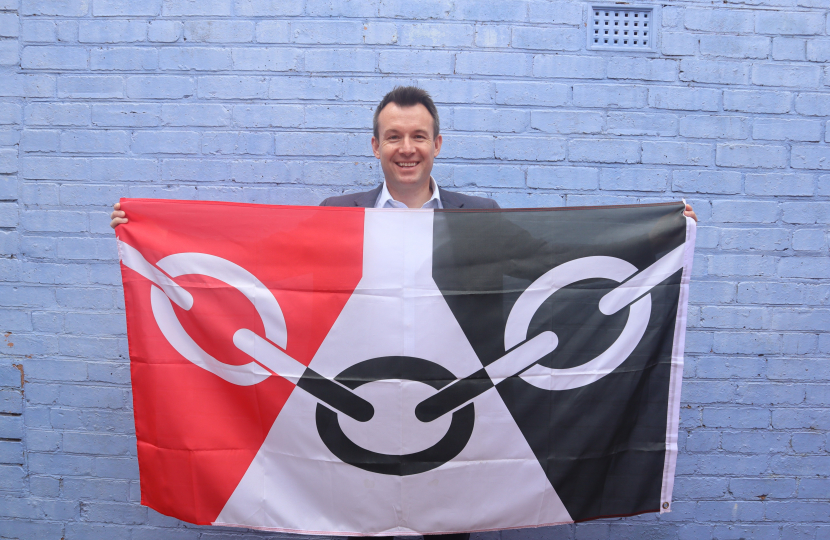 Stuart Anderson MP is proud to be celebrating Black Country Day, which is taking place on Thursday, the 14th of July 2022. Since its inception in 2013, Black Country Day has been officially celebrated every year on this date. The date was chosen to mark the invention of the world’s first steam engine, the Newcomen Engine, which was built in 1712 at the Conygree Coalworks near Dudley. A replica of the engine can today be seen at the Black Country Living Museum. Stuart said that he is delighted to support this special event, which recognises the integral role that the area has played in the nation’s heritage and aims to foster increased involvement in the life of the area.

Stuart has now called on everyone to take part in the celebrations and to find out more about the area’s fascinating history. The story of Wolverhampton starts in 985 AD when it was founded by Lady Wulfruna. In the 19th century, the city was known as a global leader in the manufacture of locks and all kinds of iron goods. The iconic Chubb Building is still located in the city centre host to Lighthouse Media Centre. It has been joined by the i9 building, which is modelled on the building and is home to dual headquarters for the Department for Levelling Up, Housing and Communities – a move that Stuart had successfully lobbied for to bring policymakers closer to the communities that they serve.

Stuart has used the occasion to renew his own commitment to delivering increased investment and economic opportunities for everyone. He has been pleased to support the Government’s plans to drive economic growth in the towns and cities of the Black Country as they recover from COVID-19. Stuart successfully campaigned for Wolverhampton to be part of the 2022 Commonwealth Games. He is pleased that the time trial cycling is taking place in the city, starting in city's very own West Park on the 4th of August 2022. The Government has backed the delivery of the Games with £778 million. This has already accelerated investment and regeneration across the West Midlands.

Stuart is delighted that the area has been put at the heart of the Levelling Up White Paper which was published earlier this year, with £1.5 billion to catalyse the revival of the city. Wolverhampton and build new homes of which people can be proud. Walsall, and Dudley will also benefit from £71 million through the Towns Fund to kickstart local infrastructure projects. Together with Sandwell, they will receive more than £35 million from the Shared Prosperity Fund. Stuart has also supported plans to build a fully integrated transport hub in the city, which will provide an attractive gateway into the Black Country. In addition, the city has received £20 million to develop its City Learning Quarter.

Stuart Anderson MP said: “The Black Country was the birthplace of the Industrial Revolution, and I am fully committed to doing whatever I can to ensure that it can reach its full potential in the years ahead. I am proud of the enormous contribution that the area continues to make to the wellbeing of our nation. Wolverhampton is a wonderful city with a proud history and a very bright future. I am proud to represent Wolverhampton and, as we plan our recovery from COVID-19, I want to ensure that we build back better than before. I would encourage everyone to join in as we celebrate the region's industrial heritage, history, and culture on Black Country Day.”

When businesses thrive, so does our economy. I love Wolverhampton. It is a great city, but has been left behind for too many decades. This is now starting to change - with unprecedented levels of investment received to level up opportunities and unleash our fantastic city’s potential.