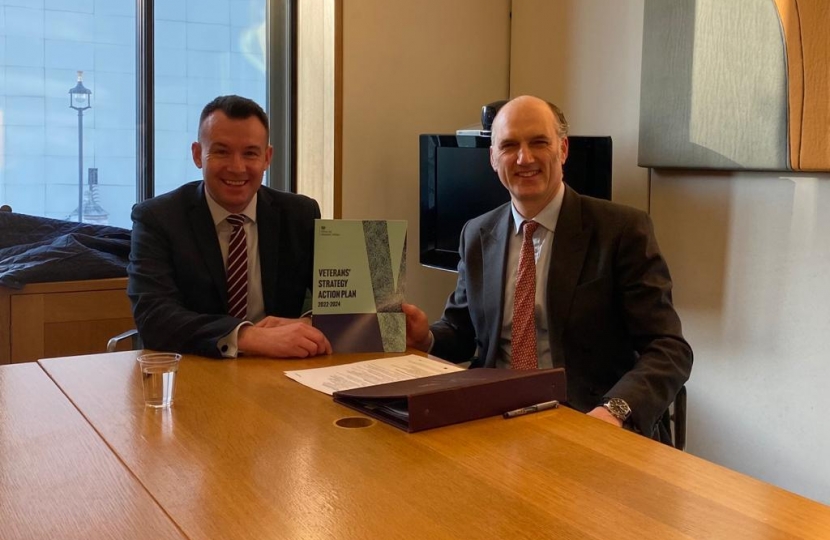 Stuart Anderson MP has welcomed a plan to invest £70 million in veteran welfare. It follows publication of the new Veterans Strategy Action Plan, which sets out the next steps being taken by the Government to make the UK the best place in the world to be a veteran by 2028 - ten years after publication of the initial strategy in 2018. This iteration sets out plans to expedite progress in the next two years by better understanding veteran welfare needs; improving services for veterans; and mobilising their talents.

Stuart endorsed the ambitious plans, designed to help veterans maximise their potential as civilians and deliver a gold standard of support that meets their needs. It sets out how the Government will deal with legacy issues of Northern Ireland, address with compassion historic hurt felt by sections of the veteran community, level up access to support, maximise their employability, and mobilise their talents to benefit all corners of the UK. It aims to increase the employment of veterans in sectors such as health and teaching with, for example, a £40,000 training bursary to become secondary school teachers.

The Action Plan will also see an £18 million invested in health services. Stuart said that this additional support would help to fix gaps in provision from his time in the Army by delivering better services that address both the physical and mental health needs of veterans at an earlier stage. Stuart joined the Army at the age of 17 and suffered a high-velocity gunshot wound to the foot just days before his eighteenth birthday. While he was initially told that his foot would have to be amputated, weeks of surgery and subsequent rehabilitation went better than expected and he returned to active service within a year in Northern Ireland. He then went on to complete eight years in the Royal Green Jackets (now the Rifles).

The Action Plan builds on steps already taken to improve support for veterans by, helping them into work through the guaranteed interview scheme, introducing the veteran’s railcard, and awarding vulnerable veterans priority access to social housing. The Veterans’ Gateway provides a first port of call for veterans in need of help. For 24-hour assistance, veterans can call 0808 802 1212.

Stuart Anderson MP said: “I am proud to serve our nation, both during my time in the Armed Forces and now as a Member of Parliament. The Government has a lifelong obligation to ensure that those who bravely serve our country are given all the support they need to lead successful and enriching civilian lives. I welcome this action plan, with £70 million funding to ensure Britain can become the best place in the world to be a veteran. My time in the Army was characterised by an enduring sense of comradeship and loyalty to fellow troops. Yet, the injuries I sustained during my time in the Army left me with mental scars I was left to deal with long after the end of my active service. I am delighted with this Government’s determination to level up access to health, employment, and housing support. I will continue to hold the Government to account in delivering on the ambitious commitments set out today.”