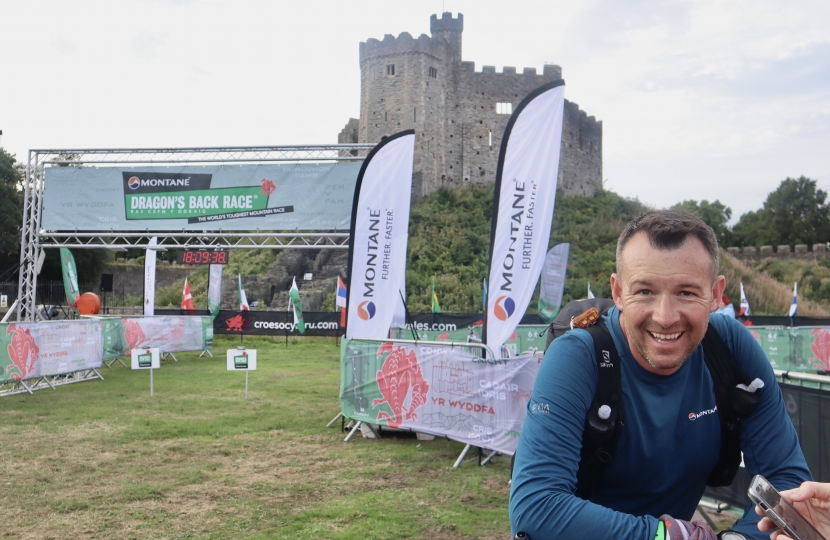 Stuart Anderson MP has completed the world’s toughest mountain race. The Montane Dragon’s Back Race saw Stuart undertake the 230-mile, six-day challenge down the mountainous spine of Wales. It was the same as twice over the ascent of Everest. The race started in Conwy Castle at finished at the iconic Cardiff Castle six days later. The daily distance was 63km, equivalent to 1.5 marathons a day.

400 people signed up to take part, and Stuart was one of a quarter of entrants that made it to the very end of the race. 200 people dropped out on the first day, and another 100 people dropped out on the second day. Day one and two of the challenge saw Stuart endure extreme weather; the temperature rose to 26 degrees. Stuart was running for fourteen hours on some of the hottest days, with limited rations of food and water. At times, conditions were so bad that participants had to be airlifted out of the track.

Stuart was the only Member of Parliament to undertake the legendary multi-stage, ultra-running journey. This was the most arduous challenge Stuart has undertaken since he sustained injuries while in the Army. At the age of just 17, Stuart suffered a high-velocity gunshot wound to the foot and was told that his foot and possibly his lower leg would have to be amputated. Weeks of surgery went better than expected and Stuart returned to full service in the Army within the following year.

On day five, Stuart got over the finish line by just ninety seconds. During the challenge, Stuart got a stomach bug and became ill. He was very close to having to call for emergency assistance. After some rest, Stuart continued with the race and has raised thousands of pounds for the two charities, which are close to his heart: the Wolverhampton Wanderer’s Foundation and the Elysium Memorial Foundation.

The Wolves Foundation inspires and educates our communities to become more active and learn important lifelong skills to lead healthier, more active lives. The Elysium Memorial is raising vital funds to establish a permanent memorial to remember those who lost their lives to suicide after serving in the Armed Forces. This includes some of Stuart’s closest friends who he had served alongside in the Army.

Stuart Anderson MP said: “Without a doubt, the Dragon’s Back Race is one of the world’s most brutal challenges; it is the most strenuous endeavour that I have so far put myself through. I have been very encouraged by the many messages of support and the generous donations I have received for the two fantastic charities I ran for – the Elysium Memorial and the Wolves Foundation. This helped me to persevere, even at the most difficult parts of the challenge. Together, we have raised thousands of pounds for these two incredible charities. I am keeping my fundraising pages open for a while longer. All donations are gratefully received and go directly to the two charities. I have seen the impact of their work first-hand, and I know that the money raised will make meaningful change to people’s lives. I look forward to continuing to work with them.”