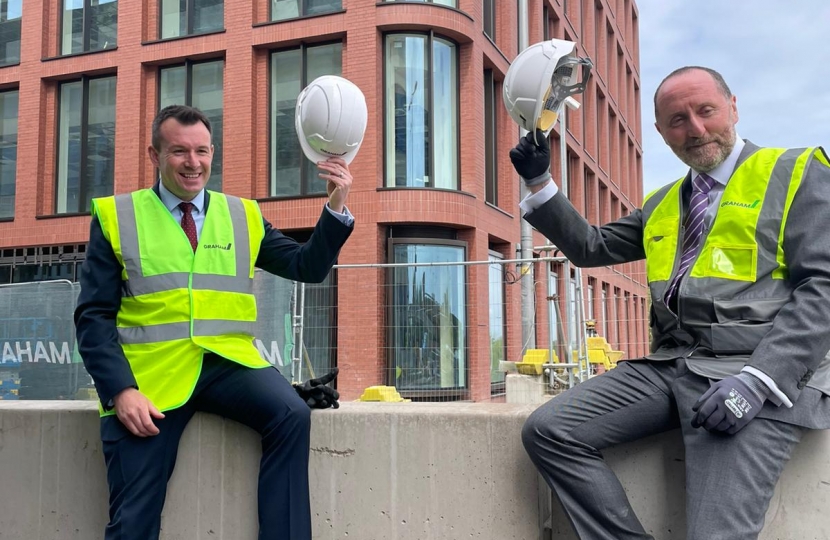 Stuart Anderson MP is delighted that Wolverhampton’s i9 building has been chosen as the location for the new headquarters of the Ministry of Housing, Communities and Local Government.

It follows the news, in February 2021, that the Government accepted Stuart’s request to make Wolverhampton the first city outside of London to have a Ministerial office with regular Ministerial presence.

In February, Stuart asked Cabinet Office Minister Amanda Milling MP to “seriously consider” looking at the possibility of the i9 as an office location. The Minister confirmed that the Government was considering its options for the relocation, which is part of the Places for Growth programme.

Since then, the Government has moved at pace to secure a venue and recruit a wide range of staff. Employment opportunities have been advertised on the Government’s civil service jobs website. The move is expected to bring up to a thousand jobs to the region, with over 300 of which delivered in the coming years. At least 150 roles will be based in the city as soon as possible.

The announcement was made as part of a visit to the site by Housing Minister Eddie Hughes MP. The i9, which will provide up to 52,000 sq ft of stunning Grade A office space, will compliment Wolverhampton’s family of red brick Victorian buildings and is due for completion this summer. It is in the historic heart of Wolverhampton, close to landmarks such as the Chubb Building whose design it reflects and complements. The i9 is part of the award-winning Wolverhampton Interchange scheme, which will create an integrated transport hub within a new commercial district.

The scheme is being supported by Government investment, which includes £13 million from the Black Country Growth Deal and £15 million towards the renewal of the city centre from the Future High Streets Fund, in addition to the £25 million Towns Fund.

Stuart Anderson MP: “Earlier this year, I was pleased to report that the Government accepted my request to set up a new headquarters for the Ministry of Housing, Communities and Local Government in our great city. Since then, we have moved at pace to secure a venue and recruit staff. I am delighted that the i9 has been announced as that venue. It is a brand new, top of the range development in our city centre. This move will help to revitalise the local area as we look to recover from the outbreak of COVID-19. I would like to thank the Government, the Mayor of the West Midlands, and the City of Wolverhampton Council for backing my plan to level up skills, jobs and infrastructure across our constituency.”