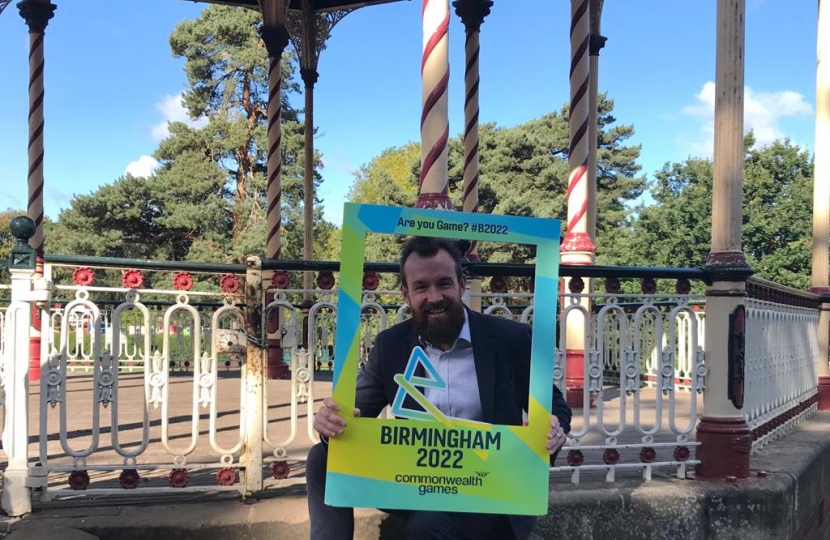 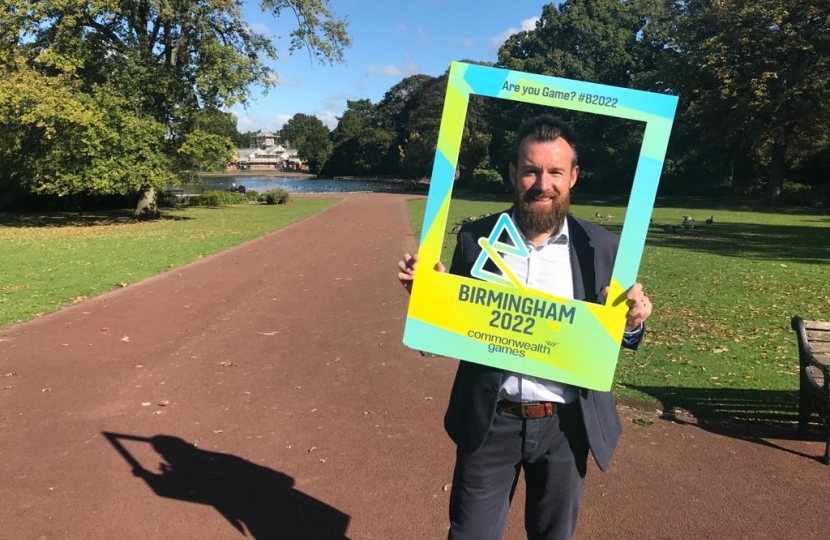 Stuart Anderson MP has welcomed the announcement that part of the Commonwealth Games, which are scheduled for the summer of 2022, will take part in Wolverhampton South West.
On the 26th of February 2021, it was confirmed the Time Trial Cycling will take place at West Park on Thursday the 4th of August 2022 between 10am and 4pm.

West Park is situated in the heart of Stuart’s Wolverhampton South West constituency. The time trial is a straight race against the clock for individual athletes. It is often referred to as ‘the race of truth’, as winning depends only on each rider's strength and endurance, not on help provided by teammates and others riding ahead. Two races are confirmed to take place in West Park.

Stuart Anderson MP called for the inclusion of Wolverhampton South West in a debate which took place in the House of Commons on the 9th of March 2020. This debate considered temporary measures to support the delivery of the 2022 Games, including a provision to enable the Government to provide financial assistance to the Organising Committee for the Games.

As part of this debate, Stuart Anderson MP said that it would “only be right” that parts of the Games are hosted in the City of Wolverhampton. Stuart added that doing so would give athletes an opportunity to experience some of the hills that he has experienced on his regular runs and training for the London Marathon which has been postponed due to Covid-19. While the Games are to be held principally in Birmingham in 2022, Stuart argued that there ought to be many opportunities as part of the event to showcase the whole of the West Midlands at the Games.

Stuart Anderson MP also sat on the Public Bill Committee for the Commonwealth Games Act, which brought forward legislation on the event. Following agreement by both Houses of Parliament on the text of the legislation, it received Royal Assent on the 25th of June 2020.

Stuart Anderson MP said: “I am delighted my request that Wolverhampton South West be included in the Commonwealth Games has been taken up. This is huge for us. I would not have done justice for our great city if I had not mentioned it in the debate. Our city has been left behind for decades and needs levelling up. With three quarters of a billion pounds coming to the West Midlands, I will be banging the drum for Wolverhampton. It would have been easy to focus just on Birmingham, but the West Midlands will stand strong together. There are many great parts of the region and I am delighted visitors will be able to experience them.”

The 2022 Commonwealth Games will take place in Birmingham between the 27th of July and the 7th of August 2022. The Games are expected to play host to up to 71 nations and territories, which will be bringing with them 6,500 athletes and officials to showcase to 1.5 billion people.

Around 90 competitors are expected to take part across the men’s and women’s events and spectators will be able to line the route of the Time Trial. The 43-acre West Park opened in in 1882. The popular destination is one of England’s finest Victorian parks.

Wolverhampton has strong links to road cycling, with the first mass start cycling road race being held in the city in 1942. Andy Tennant, who was born in Wolverhampton and still lives in the city, won silver in the Team Pursuit for Team England at the 2014 Commonwealth Games in Glasgow. The exact date will be unveiled in the next few weeks, when the full daily schedule is set to be published.

As a parent, I want to ensure that the world which we pass on to the next generation is greener and more sustainable. Since becoming the Member of Parliament, I have been contacted by many constituents who feel the same way.