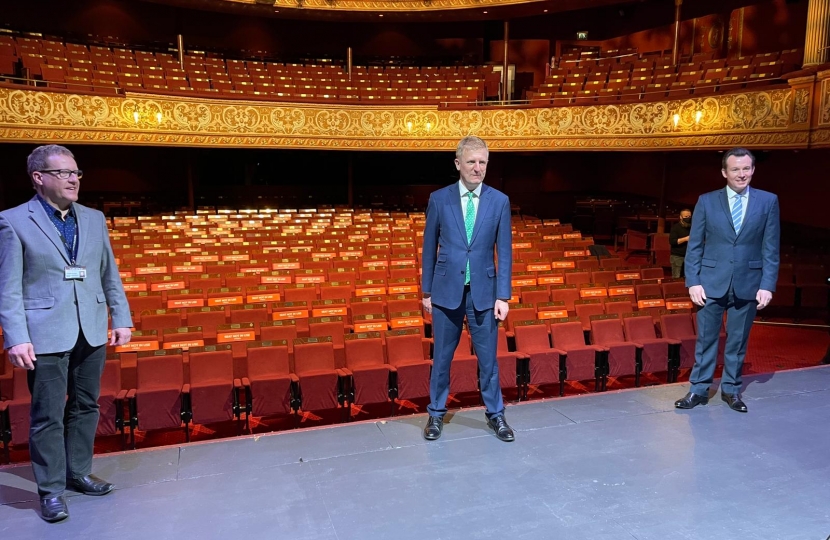 Stuart Anderson MP was delighted to host the Secretary of State for Digital, Culture, Media, and Sport Oliver Dowden CBE MP in Wolverhampton. Mr Dowden visited the Grand Theatre to launch the latest round of the Government’s Culture Recovery Fund. The visit took place on Monday, the 29th of March.

The Culture Recovery Fund was launched in July 2020. On the 7th of July, Stuart took part in an urgent question in Parliament to request that the Government ensures the unprecedented investment reaches grassroots organisations across the country that have been most affected by the outbreak of COVID-19. The Minister confirmed that the Government’s focus is on getting funding to cultural organisations up and down the country. Since then, over 5,000 cultural and heritage organisations have benefitted from more than £1.2 billion via the Culture Recovery Fund, including over £2 million being received by the following organisations in Stuart’s constituency:

Grants worth almost £60 million have been awarded to help theatres plan for reopening in every corner of the country, including Wolverhampton’s very own Grand Theatre. The Grand Theatre was awarded £568,357 to restart socially distanced events when it is safe to do so. This builds on £1,187,530 that the Grand received last year. Stuart has been chairing meetings with key stakeholders from the Grand Theatre to ensure that it is fully supported as it prepares to reopen after the outbreak of COVID-19.

Stuart Anderson MP said: “This latest set of funding will be a huge boost to organisations in our city’s fantastic arts and heritage sector as they prepare to reopen. It has been my honour to work with and stand up for the work carried out by brilliant organisations such as Wolverhampton’s Grand Theatre. Not only are these organisations the backbone of our local economy, they are valued community assets that enrich our lives and help to level up opportunities by unlocking our city’s amazing potential. I will continue to do all that I can do champion their work in Parliament, Wolverhampton, and beyond.”

Chief Executive & Artistic Director Wolverhampton Grand Theatre Adrian Jackson said: "The wonderful news we have received today has generated an incredible air of excitement within Wolverhampton Grand Theatre. Our theatre is an immense cultural pillar for Wolverhampton and the Black Country and has stood proudly on this site since opening its doors on 10 December 1894. Many great artistes have learnt their craft here throughout the decades, and thanks to the grant from the Culture Recovery Fund, the future of the theatre is now firmly safeguarded and secured. The Grand is an anchor for creativity which provides cultural enrichment for our community and a platform for many established and growing performers, technicians and theatre professionals. We are now able to begin the process of reopening the theatre and we look forward to welcoming our audience back in the coming months when the Grand Theatre’s heart will once again beat loudly in Wolverhampton and beyond.”

Culture Secretary Oliver Dowden MP said: “Our record breaking Culture Recovery Fund has already helped thousands of culture and heritage organisations across the country survive the biggest crisis they've ever faced. Now we’re staying by their side as they prepare to welcome the public back through their doors - helping our cultural gems plan for reopening and thrive in the better times ahead.”