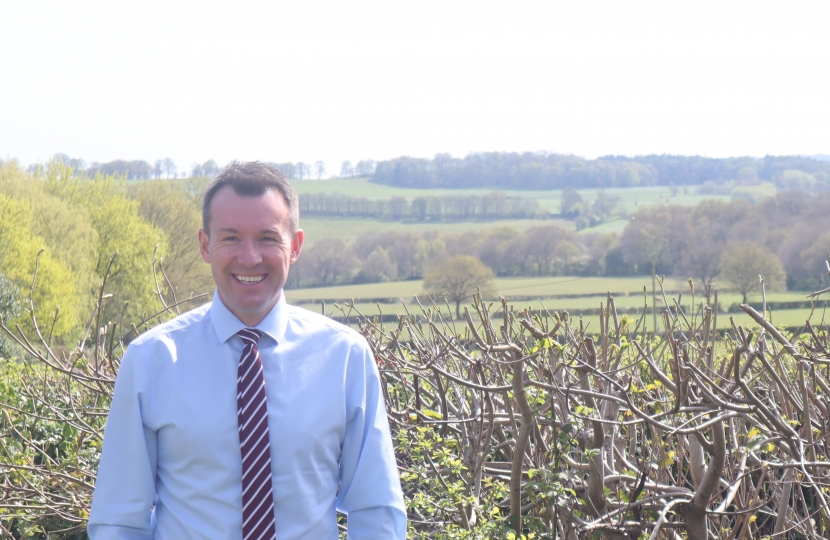 Stuart Anderson MP has renewed his pledge to protecting Wolverhampton’s greenbelt from unnecessary development. In a speech to Parliament, Stuart reaffirmed his commitment to seeing the city at the forefront of brownfield regeneration, which has the potential to take pressure off the greenbelt and protect our environment.

Stuart’s speech was part of a debate on measures set out in the Queen’s Speech to deliver more affordable and safe housing for all. The Government intends to update the planning system to deliver homes of the future. As part of this, Ministers have stated their ambition to establish a new framework that focuses on positive outcomes, such as environmental opportunities and better-designed places. Stuart has endorsed the Government’s ambitions and set out a way they can be achieved locally: to build more affordable housing, invest in brownfield remediation technology, and protect the precious greenbelt surrounding the city.

Stuart has called on the Government to invest in more affordable housing and welcomed its commitment to deliver over £12 billion in funding over the next five years. Working with the Mayor of the West Midlands Andy Street, Stuart has been championing the regeneration of brownfield sites to replace the need for greenfield sites to be built on. Last year, the Government invested £15 million into the National Brownfield Institute which is based in the city and set up to pioneer technology in the remediation of derelict sites and buildings. Stuart has also been working with local campaigners to protect sites such as the Seven Cornfields and land surrounding the Wolverhampton Environment Centre.

In recent months, the Government has confirmed that the Ministry of Housing, Communities and Local Government has accepted Stuart’s request to set up a dual headquarters in Wolverhampton. It will bring 500 jobs to the city, with recruitment already well underway. The city will also be home to the Modern Methods of Construction Taskforce, backed by £10 million of seed funding, to accelerate the delivery of MMC homes. The Taskforce will consist of world-leading experts from across government and industry to fast-track the adoption of modern methods of construction.

Stuart Anderson MP said: “The Government’s investment will place Wolverhampton at the forefront of excellence in housebuilding. Research into modern methods of construction has the potential to deliver more affordable housing, bring derelict sites back into use, and protect the small amount of greenbelt that we have and need to preserve for future generations to enjoy. I want to see brownfield sites always considered first when it comes to building new homes. I will continue to work with the Friends of the Wolverhampton Environment Centre and Save the Seven Cornfields campaign groups to ensure their voices are heard at the highest level.”

“I am delighted to speak in this debate on the Queen’s Speech, and what better matter for me to speak about than housing, considering that the second office of the Ministry of Housing, Communities and Local Government is currently in the process of moving to Wolverhampton? That news has been met with great delight across the city. I recently had a meeting with the local DWP, which is already recruiting for setting up the new MHCLG office. It is a credit to James Attwood and his team at the DWP, who are passionate about making sure that we get more people in Wolverhampton into jobs.

Why is that so important? Wolverhampton is looking to be at the forefront of brownfield-first development. We now have the National Brownfield Institute in Wolverhampton, and we want to pioneer new technologies, through modern methods of construction, to help protect our green belt but also ensure that we get affordable housing. We have just over 10% of green space in Wolverhampton, and we want to make sure that we keep it. We have prominent campaigns, such as Save the Seven Cornfields, Lower Penn group, and Wolverhampton Environment Centre, which are trying to protect beautiful areas in and around Wolverhampton. They are a lifeline for so many people in our city to enjoy nature, but we also need houses. The argument always come back, “We don’t have enough brownfield”, but that is categorically not true in Wolverhampton, where we have a lot of brownfield sites, empty retail space, and a large city centre that can be filled with a lot of residential accommodation. We are delighted by the Towns Fund, the Future High Streets Fund, and investment into our city, but more needs to be done to see a transformational shift of private investment into the city to help build those houses.

To summarise, this is very simple: we need more housing, especially affordable housing; we have an abundance of brownfield sites or underutilised buildings within our city; and we need to protect the small amount of green belt that we have. So I will fully support these planning reforms, because they provide all of that for Wolverhampton, to ensure that our city goes from strength to strength, keeps the green belt that we love so much and also provides the affordable housing that we need in our city.”