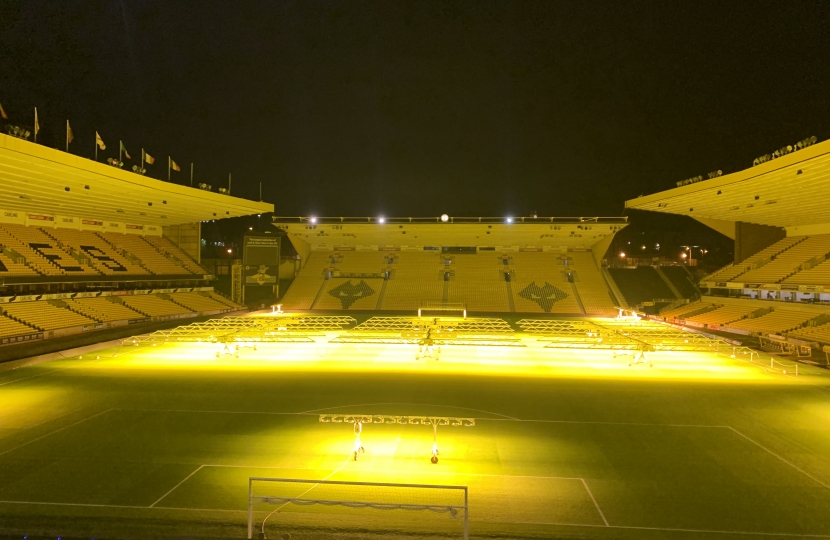 Stuart Anderson MP has announced that he will undertake the Molineux Sleepout for the third year in a row. The first-ever sleepout took place in 2019, followed by a virtual sleepout in 2020 due to restrictions necessitated by COVID-19. Stuart will be returning to the Molineux Stadium, home to Wolverhampton Football Club, to raise funds for two local charities: the Wolves Foundation and the Good Shepherd.

This year, the event will take place on Friday, the 12th of November. It has been organised to raise funds and awareness to support vulnerable people and those who are experiencing homelessness. Funds will be shared between community projects that are run by the Wolves Foundation and the Good Shepherd charity, which is situated opposite the Molineux Stadium.

Stuart recently undertook the Montane Dragon’s Back Race - the world’s toughest mountain race - for two charities, including the Wolves Foundation. The Wolves Foundation invest the funds in its programmes such as ‘Feed Our Pack’ to alleviate food poverty. Stuart regularly volunteers with the Good Shepherd, which which provides food and support services for those in need in the local community.

Stuart Anderson MP said: “The Wolves Foundation and the Good Shepherd are wonderful organisations that do so much to help the most vulnerable in our community, and I am delighted to be able to support them in this way. I will be joining residents from across the city in sleeping out at the Molineux Stadium to raise vital funds for these two charities.

Our city has been left behind for too many decades, and I am determined to see this changed for the better. The Government has invested significantly in our city, with a multi-million pound package of support to help keep families warm and well-fed. This fundraiser will raise further awareness about these important issues and why it matters that everyone is included in our city’s recovery from COVID-19. I would welcome all donations of any size.”

Donations can be made via this link: Stuart Anderson MP is fundraising for Wolverhampton Wanderers Foundation (justgiving.com)

The City of Wolverhampton Council has received £2 million to keep families warm and well-fed, and an extra £3 million to help households with council tax payments. Extra funding is set to come from the £500 million Household Support Fund. Discussions on how best to support people in the long-term are ongoing in the run up to the Spending Review in October.

Stuart Anderson MP has called on the Government to put communities and young people at the heart of the Autumn Budget, which is expected to be delivered later this month by the Chancellor of the Exchequer, the Rt. Hon. Rishi Sunak MP.