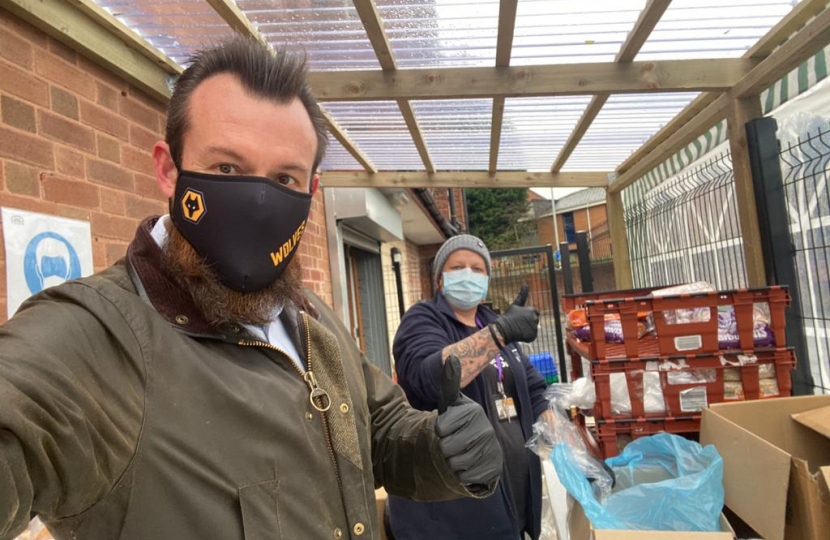 Stuart Anderson, the Member of Parliament for the Wolverhampton South West constituency, is urging people to check before giving to help ensure that their donations reach genuine charities this Christmas. Action Fraud, the Charity Commission, and the Fundraising Regulator, have warned that while the vast majority of fundraising appeals and collections are genuine, criminals can set up fake charities, or even impersonate well-known charitable organisations, to deceive victims.

With Action Fraud and the charity regulators, Stuart Anderson MP is urging everyone to follow some simple steps to ensure they have a #FraudFreeXmas this year.

Stuart Anderson MP, said:  “I have been heartened and encouraged to witness the generous community spirit that people across Wolverhampton South West have demonstrated this year. I have been volunteering with some fantastic local charities, and I am keen to do what I can to support them - such as recently taking part in the Molineux Sleepout. I would also like to thank all of those who have been looking out for vulnerable neighbours and friends at this difficult time. I want to encourage those across Wolverhampton who choose to donate this Christmas, to support registered charities, and to be vigilant against ‘charity’ scams. Together, we can look after those who need our help.”

Pauline Smith, Head of Action Fraud, said: “Charities do incredibly important work, helping those in greatest need, especially at this time of year. Unfortunately, criminals will try to abuse the generosity and goodwill of others and this can have a huge financial impact on charities and the good causes they support. We would encourage people not to be put off donating to charities, but instead to be vigilant. Make sure you do your research and follow our simple steps to ensure you’re giving your money to a legitimate charity. Don’t let your donations end up in the wrong hands this Christmas.”

The Charity Commission has previously warned that the pandemic has created more fertile ground for fraudsters. Action Fraud reported earlier this year that it had received reports of a scam email, purporting to be from HM Government, asking for donations to the NHS as part of a ‘nationwide appeal in efforts against coronavirus’.

Helen Stephenson CBE, Chief Executive of the Charity Commission, said: “Christmas is always a time of generous charitable giving, and that’s to be celebrated. This year it comes as charities face immense financial strain after heroic efforts to support some of society’s most vulnerable people through the pandemic. This means it’s more important than ever to ensure that when we reach into our pockets, our festive contributions don’t go astray. That’s why we’re urging everyone to give with their head as well as their heart and check before they give.”

Gerald Oppenheim, Chief Executive of the Fundraising Regulator, said: “The British public give generously to charities all year round, but even more so at Christmas. Fundraising this year takes on a greater importance after a tough time for so many, including charities whose public fundraising activities have been paused for much of 2020. Unfortunately, there are a small number of people who may try to take advantage of your festive goodwill, and direct donations away from legitimate charities. Whilst we encourage donors to keep giving, it is essential that you remain alert and aware for any unusual activity when making a donation. Be sure to carry out a few important checks before giving if you have any concerns. This includes checking to see if the charity is registered with the Fundraising Regulator, which means they are committed to maintaining good standards of fundraising practice.”

Previous research from the Charity Commission and the Fundraising Regulator revealed that less than half of people that give to charity usually make checks before donating.

Action Fraud, the Charity Commission and the Fundraising Regulator are therefore urging the public to follow some simple steps to ensure they have a #FraudFreeXmas this year.

Take the following steps to make sure your donations go to the right place:

After making these checks, if you think that a fundraising appeal or collection is fake, report it to Action Fraud online at actionfraud.police.uk or by calling 0300 123 2040.