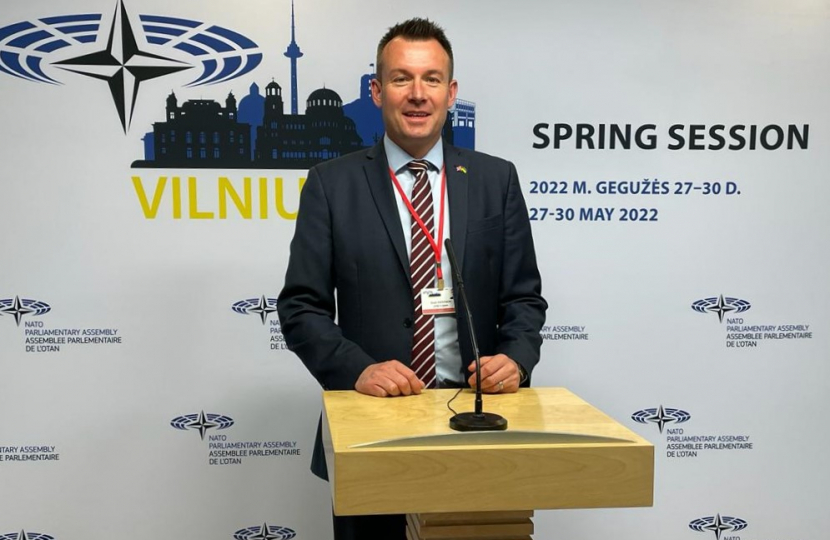 Stuart Anderson MP has returned from a four day visit to Lithuania, where he met with representatives from more than 30 NATO countries and partner countries. It was part of the Spring Session of the NATO Parliamentary Assembly, which brought together hundreds of legislators from across the NATO Alliance for four days of talks in the capital city of Vilnius between the 27th and the 30th May 2022. The NATO Parliamentary Assembly, founded in 1955, provides an important forum to promote mutual understanding between parliamentarians from NATO countries, ensuring close working and co-operation between the parliamentarians as well as an essential link between them and the citizens of NATO nations. The Assembly’s 2022 Spring Session should have been held in Kyiv, but the Russian invasion forced its relocation to Vilnius.

The discussions inevitably focused on NATO’s response to Putin’s invasion of Ukraine and other NATO partnerships. The legislators considered a series of reports and resolutions put forward, and heard from a range of stakeholders including Ukraine’s First Deputy Minister of Foreign Affairs, Emine Dzhaparova, President of the NATO Parliamentary Assembly, Representative Gerald Connolly, the President of Lithuania, Gitanas Nauseda, and Lithuanian Foreign Minister Gabrielius Landsbergis. The Assembly pledged strong support for Ukraine in response to an appeal made by the country’s Defence Minister for urgent supplies of military aid to help repel the Russian assault. Stuart welcomed the decision, which he says will send a strong signal to heads of NATO nations who will meet at a summit next month in Madrid to address security challenges facing the Alliance, including Russia’s ongoing war against Ukraine.

In Lithuania, Stuart visited the Joint Expeditionary Force (JEF), a task group led by the UK and nine like-minded, northern European nations: Denmark, Estonia, Finland, Latvia, Iceland, Lithuania, the Netherlands, Norway, and Sweden. Stuart saw some of the significant support that it is providing to ensure that Ukrainians have access to basic necessities and medical supplies, and that Ukraine receives the military aid that it needs to best defend itself. During the visit, Stuart was honoured to attend a special meeting with parliamentarians from Kosovo, who thanked the role he played during the war in 1999 which was resolved when NATO intervened. Stuart also welcomed a new joint declaration on defence and security collaboration between Lithuania and the UK, signed ahead of the visit on the 23rd of May 2022, by Foreign Secretary Liz Truss and Lithuanian Foreign Minister Gabrielius Landsbergis in London.

Stuart Anderson MP said: “NATO is the cornerstone of our defence, and so it was excellent to meet fellow parliamentarians from NATO countries ahead of the Madrid Summit of NATO leaders, which will be an important opportunity to further upgrade NATO’s defences in Eastern Europe. The NATO Parliamentary Assembly serves as an important forum to promote mutual understanding between parliamentarians from across the Alliance. We are clear that failure to turn back the Russian invasion would risk aggression elsewhere. That is why we stand united in defence of Ukraine’s sovereignty, territorial integrity, and ability to choose its own destiny.”

For more on the work of the Parliamentary Assembly, please visit www.nato-pa.int.