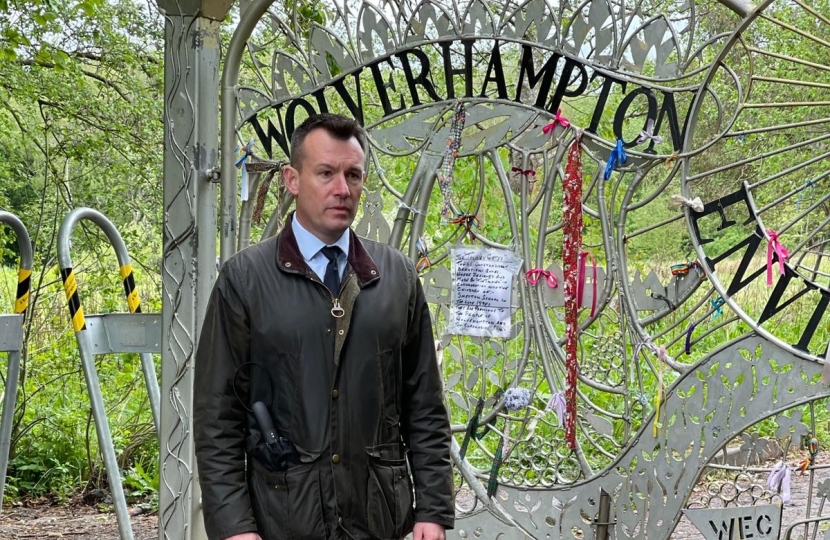 Stuart has visited the Wolverhampton Environment Centre (WEC), a key site that he wants to protect from any unnecessary development. The trip took place on Friday, the 21st of May 2021. Stuart was given a tour of the site, which he often jogs through, to better understand the importance of the area to local residents.

As local MP, Stuart has been working with the campaign group - Friends of the WEC - to scrutinise the City of Wolverhampton Council’s decision to earmark part of the site as previously developed land that can be built on. Previously, the land had been the home to greenhouses and ancillary buildings that grew plants and shrubs for Wolverhampton’s parks and streets. The environment centre had also provided education facilities where local people could learn about and connect with the great outdoors, with a variety of wildlife and with around 50 hectares (120 acres) of meadows, scrubland, and woodland. It is part of one of the only nature reserves that people in Wolverhampton can access.

In a speech to Parliament on the 18th of May, Stuart mentioned the Wolverhampton Environmental Centre as one of the sites that he does not want to see built on. This sits alongside Stuart’s opposition to plans to build on the Seven Cornfields and Lower Penn.

Working with the Mayor of the West Midlands Andy Street, it has been proven that none of the green-belt needs to be built on in at least the next ten years. Stuart is vigorously campaigning for greater investment in research into the remediation of brownfield sites which can further take pressure off the greenfield and transform derelict buildings into homes of the future.

Stuart Anderson MP said: “I stood on a manifesto which committed to campaign for a ‘brownfield first’ policy when it comes to future planning arrangements. I want to see the Wolverhampton Environment Centre - and other sites across our city - protected from needless development.  It has been shown that there are more than enough brownfield sites that can be regenerated to cater for future housing requirements. The Government’s investment plan, through initiatives such as the National Brownfield Institute, is helping to drive forward research into modern methods of construction which deliver more affordable homes and protect our environment from being encroached upon. Our precious greenbelt must be protected for present and future generations to enjoy.”