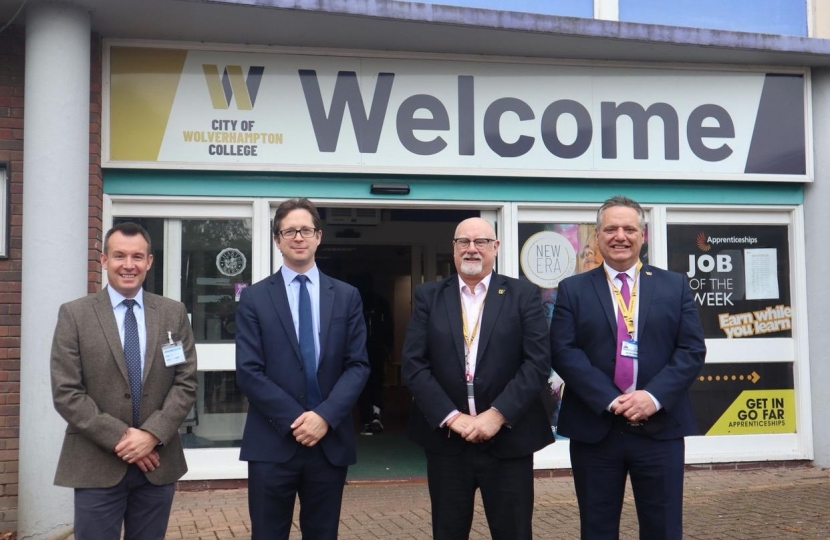 Stuart Anderson MP has welcomed extra funding to deliver a new learner quarter in Wolverhampton. £20 million has been secured from the Government to progress the ambitious plans which, over a ten year period, will benefit 40,000 learners, create 7,500 apprenticeships, create new jobs, and safeguarding existing ones in the local economy. Stuart has said that the funding, which is from the latest round of the Government’s Further Education Capital Transformation Fund, will now enable the project to proceed at pace – with an opening date of September 2024.

Stuart has championed the project from day one, having last year hosted Skills Minister Alex Burghart in Wolverhampton to discuss the plans in greater detail. He was delighted when, in the Autumn Budget, the Government then announced £20 million for the project from the Levelling Up Fund. He has now thanked the Minister for the further cash boost, which completes the funding package required to realise the project’s vision. It will bring together the College, Adult Education Service, and Library in one central campus in the city centre.

The City Learning Quarter will be situated in a prime location where Old Hall Street meets St. George’s Parade. It will be close to the newly developed Wolverhampton Interchange, which the Government has also supported with investment, as well as the new headquarters of the Department for Levelling Up, Housing and Communities – a move that Stuart had called for. The City Learning Quarter project is also being supported by the Towns Fund Board, of which Stuart is a member. Last year, the Board secured £25 million to deliver a range of transformational projects in the city. It has allocated £5 million to this project, with further funding from the Black Country Local Economic Partnership (LEP).

Stuart Anderson MP said: “The City Learning Quarter is an integral part of our vision to create a better future for all our residents – with the skills and opportunities needed to help them unlock their full potential. I am delighted that the Government has provided an extra £20 million to help us realise our city’s ambitions. This cash boost demonstrates the Government’s commitment to Levelling Up in action. When opened, the City Learning Quarter will offer state-of-the-art learning facilities to local people and enrich the local economy with many jobs supported.”