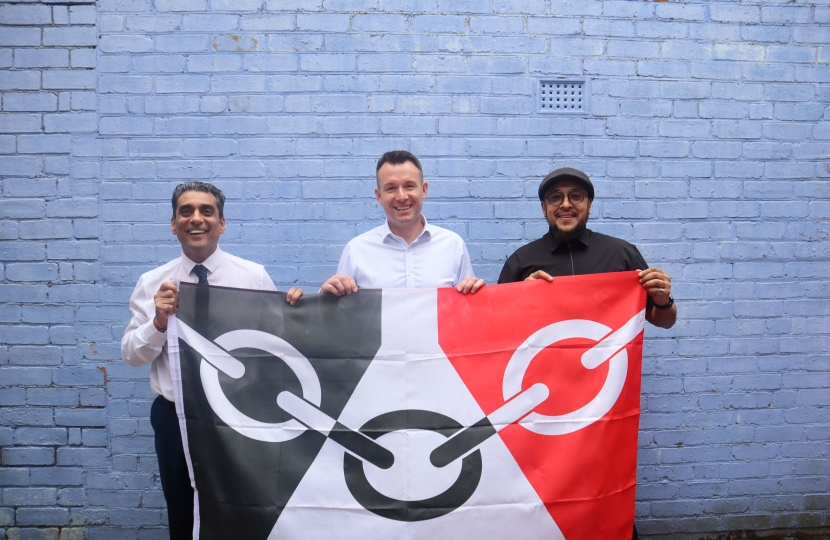 Stuart Anderson MP and Conservative councillors in Wolverhampton have joined celebrations taking place across the area to mark Black Country Day. The annual event celebrates the area’s proud heritage and pivotal role in the industrial revolution.

To mark the occasion, Stuart joined local councillors Paul Singh and Sohail Khan in proudly flying the Black Country Flag. The day has been celebrated since 2013 and the 14th of July was chosen to coincide with the anniversary of the steam engine by Thomas Newcomen in 1712. Stuart has chosen the opportunity to mark the significant achievements made in Wolverhampton and renew his pledge to driving economic regeneration in the area.

While the story of Wolverhampton starts in 985 AD when it was founded by Lady Wulfruna, the city became known as a global leader in the manufacture of locks and all kinds of iron goods at the height of the Industrial Revolution in the 19th century. The Chubb building still takes pride of place in the city centre, playing host to the independent Lighthouse Media Centre. It will soon be joined by hundreds of civil servants at the adjacent i9 building which has been designed to complement the red brick buildings neighbouring it.

As part of his plan to level up, Stuart welcomed Prime Minister Boris Johnson’s commitment to see the city “teeming with opportunity” in the next revolution, with the region having been put at the forefront of the Prime Minister’s Ten Point Plan for a Green Industrial Revolution. The Plan will mobilise £12 billion of government investment to unlock three times as much private sector investment by 2030. The Plan, which aims to support 250,000 jobs by 2030, makes a significant commitment to the West Midlands by backing the region’s world-leading automotive sector. Nearly £500 million will be spent in the next four years for the development and mass-scale production of electric vehicle batteries, and other strategic technologies as part of the commitment to provide up to £1 billion, boosting international investment into our strong manufacturing bases.

Stuart has now called on everybody to celebrate Black Country Day by taking the time to learn more about the history of the place in which they live. For example, the Black Country Flag features a chain to represent the manufacturing heritage of the area and an upright triangular shape in the background to recall the iconic glass cones and iron furnaces.

Stuart Anderson MP said: “It has been fantastic to join our community in celebrating Black Country Day and the unique contribution that Wolverhampton plays in our great region. Wolverhampton is a wonderful city with a proud history and a bright future. I want to see our city go from strength to strength. As part of the Black Country, we are the birthplace of the industrial revolution and I want to ensure that we are a city of opportunity which will excel in the years ahead.”

Cllr Paul Singh said: “I love the Black Country. It’s my home and I am proud to be Black Country through and through.  COVID-19 has had a big impact locally but the community has come together and supported each other during this time. Black Country Day is an ideal way to build on this fantastic community spirit, celebrate our collective achievements, and renew our commitment to driving forward our region. I would urge everyone to fly the flag for Black Country Day.”

Cllr Sohail Khan said: “It is a pleasure to join with others in celebrating Black Country Day. I was born and bred in Whitmore Reans, and the Black Country has made me who I am today. We have a great community but have been let down over many generations. I want to see this changed for the better and our city getting its fair share of funding and opportunities. Working with Stuart Anderson and like-minded campaigners, we are starting to see a real positive change and our city take pride of place in the Black Country.”

I love Wolverhampton. This is a great city, but it has been left behind for too many decades. I want everyone to benefit from my plan to level up opportunities and unleash our fantastic city’s potential.

Stuart Anderson MP has called on the Government to double down on efforts to protect our environment and tackle climate change.