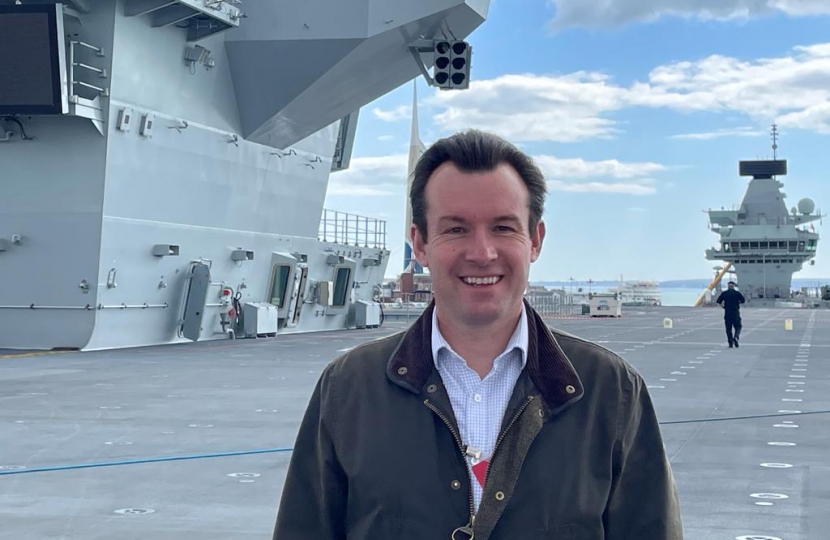 Stuart Anderson MP has urged Ministers to deliver a rapid programme of upgrades for the Royal Navy to modernise its fleet and enhance its capabilities. The call is part of a report that Stuart has co-authored as a member of the influential Defence Select Committee. The report warns that limited resources available for the Royal Navy for the remainder of this Parliament will be “insufficient” to properly operate and maintain the full fleet.

Over the last eight months, the enquiry accepted 45 pieces of written evidence and heard oral evidence from witnesses across four sessions. It found that rapidly changing technology is transforming the conduct of naval warfare and the rise of more assertive state adversaries and use of grey zone warfare techniques pose risks that need to be urgently addressed.

The Royal Navy was given a prominent role in the Integrated Review of Security, Defence, Development, and Foreign Policy. Yet, the Committee found that the Navy relies on a mix of elderly vessels that are often unavailable and new and untested assets and processes, with a tight budget for operations and maintenance. The Committee has called on the Government to invest more in resources, personnel, and number of auxiliary vessels available, particularly lower-end, adaptable vessels, such as the planned Type 31 frigate.

The Committee also called on Government to ensure that the new National Shipbuilding Strategy provides a steady pipeline of work for British shipyards, prioritises building vessels in the UK, works collaboratively with industry, and promotes exports. The Government has already said that shipbuilding investment will double over the life of this Parliament, to over £1.7 billion a year, to grow the Royal Navy surface fleet to 24 frigates and destroyers by 2030. To ensure continued scrutiny, the Committee has asked the Government to commit to reporting each year to Parliament on the availability of vessels, its shipbuilding plans, and the progress of key programmes to modernise the fleet.

Stuart Anderson MP MP said: “Our Royal Navy needs to be equipped with the most advanced capabilities possible to ensure that we continue to protect our shores and interests, as well as our global influence. We are calling on the Government to urgently address the numerous issues identified with the Navy’s current and future capabilities so that it can continue to fulfil this vital mission. We are also urging the Government to deliver on its commitment to British shipbuilding by providing a steady pipeline of work which creates jobs and strengthens our defences.”

Chair of the Defence Committee, Tobias Ellwood MP, said: “The Royal Navy has a long and proud history protecting our nation at sea. To maintain our position as one of the leading global navies, the Government must deliver a rapid programme of modernisation and growth.”