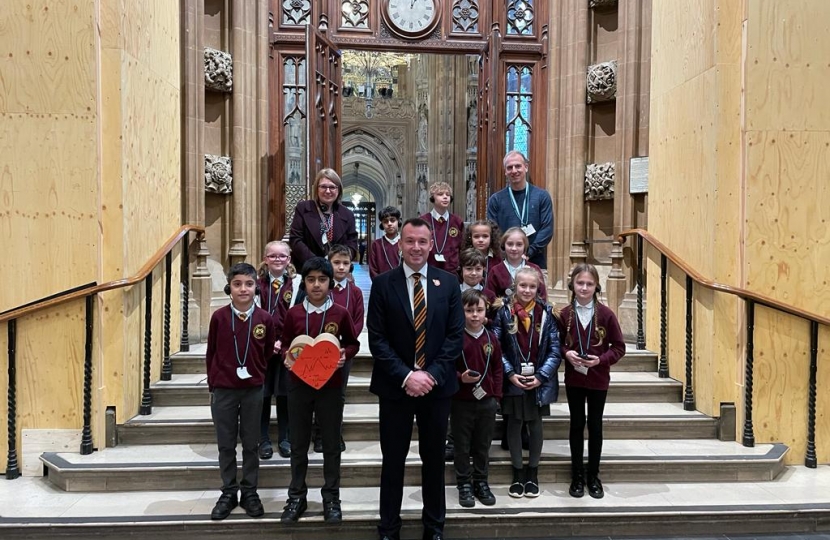 Stuart Anderson MP is celebrating UK Parliament Week and has called on his constituents across Wolverhampton South West to join a UK-wide conversation about democracy and making change happen. UK Parliament Week is an annual event which seeks to inform and educate all citizens about the work and role of the UK Parliament. It began in 2011 and has grown year on year, this year taking place from the 1st until the 7th of November 2021. The annual week of activities engages people from across the UK with Parliament, explores what it means to them and empowers them to get involved. This year, the focus of the event is on how small actions can lead to meaningful change, encouraging participants to get informed, take action, and make an impact on issues that they care about. It is a great opportunity to look at important issues of the day and work with UK Parliament to bring about change.

Community groups, local organisations, and schools across Stuart’s own constituency are taking part alongside hundreds of others across the country. On Monday the 1st of November, Stuart was delighted to welcome pupils from SS Peter and Paul Catholic Primary Academy to Parliament. Stuart met with School Council leaders to share his experiences of being a Member of Parliament and learned about the students’ plans for the future. Since being elected, Stuart has visited many schools in his constituency and is delighted that students are now able to visit Parliament again to learn even more. The schools programme has been adopted in line with current government guidelines to ensure the safety of all visitors. Online workshops and a range of digital learning resources continue to be available. Schools and other groups can find more information at https://learning.parliament.uk/en/visit-us/.

Encouraging greater youth participation at a local and national level is just one strand in Stuart’s wider plan to create a better, brighter future for young people across Wolverhampton South West. He has also been a vocal supporter of greater investment in sports and youth services. As part of his submission to the Spending Review, he called on the Government to unlock more funding from the £500 million Youth Investment Fund. The Government has now committed to releasing the remainder of the funding, delivering on this key manifesto pledge. This will support over 300 new or renovated youth facilities.

Stuart Anderson MP said: “Our democracy is admired around the world for its values which have been upheld for generations. I want to ensure that young people are equipped with the skills, knowledge, and experiences they need to lead a fulfilling life of active citizenship. Since my election, I have been privileged to visit many local schools in Wolverhampton and it is fantastic to be now able to welcome students to Parliament. Active public participation is vital in a thriving democracy such as ours, and so I am delighted to back the Government’s full range of initiatives to foster more meaningful engagement between young people and decision makers at all levels. I am thrilled that the Government has also responded to my request to unlock the £500 million Youth Investment Fund. This will support 300 new or renovated youth facilities and I will certainly be campaigning to ensure our area gets its fair share.”

Stuart Anderson MP has welcomed a plan to invest £70 million in veteran welfare.