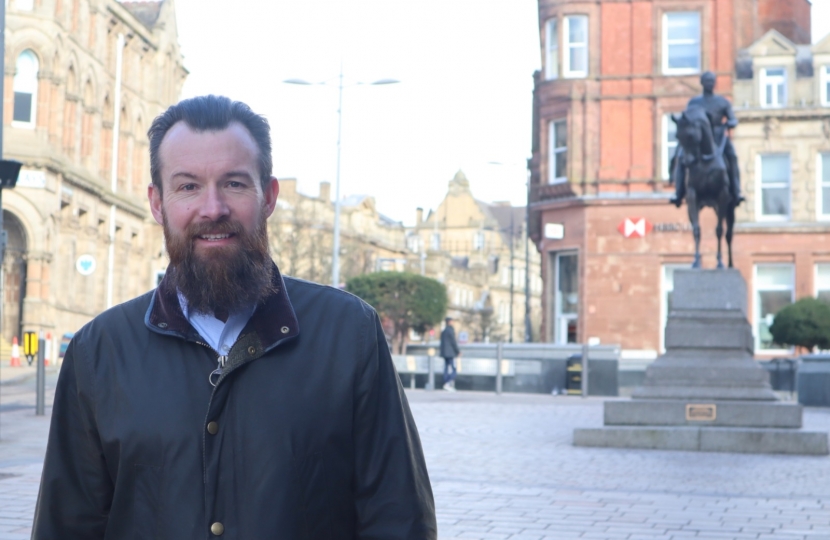 Stuart Anderson MP is delighted that the Secretary of State for Communities, Housing and Local Government Robert Jenrick MP has confirmed that the Government will be setting up a second headquarters for his Department in Wolverhampton. It is the first location to be confirmed as part of the Government’s Places for Growth programme.

Stuart Anderson MP has welcomed the announcement as a key milestone in the Government’s agenda to level up opportunities across the board and unlock the potential of local communities. Stuart believes that this move demonstrates the Government's great confidence in our city, and that it will unlock much more private investment.

The move will see at least 500 roles based across the West Midlands by 2025 – with further increases planned by 2030. It builds on the 300 roles that the Ministry of Housing, Communities and Local Government currently supports in the region.

The move to Wolverhampton will include regular Ministerial presence and it will see senior civil servants based in the City of Wolverhampton. It is part of the Government’s plan to have at least 800 roles outside of London by 2030 – including 50 per cent of the most senior positions. Recruitment is already well underway, with 40 roles already relocated to the region in the last 12 months. It will see Wolverhampton become a centre for policy development and decision making for how the country is governed when it comes to decisions regarding communities, housing, and local government. It follows recent investment which has attracted more than half a billion pounds into the city, and includes almost £15 million for the National Brownfield Institute.

Stuart Anderson MP has been campaigning for many months to ensure that the Government delivers on its commitment to move to Wolverhampton. In a recent conversation with the Chancellor Rishi Sunak, Stuart emphasised the importance of following through on this plan to ensure that opportunities are levelled up across the board for local people in Wolverhampton. On the 11th of February, Stuart asked a question in the House of Commons and asked Ministers in the Cabinet Office to outline progress made and seriously consider looking at the possibility of using the i9 as an office location to start with. The Government expects to announce the new building for the headquarters in the Spring.

Stuart Anderson MP said that the move shows that the Government is serious about investing in Wolverhampton as part of its Places for Growth programme. It will increase Wolverhampton’s prominence within the West Midlands and bring a whole new ecosystem, creating better employment and training opportunities for local people. Stuart is already in conversation with local partners such as local education providers to ensure that the investment delivers opportunities. The Ministry of Housing, Communities, and Local Government will work together with Stuart and other Government Departments to improve collaborative working and develop greater career options outside of London.

Stuart Anderson MP said: “I am delighted that the Government has confirmed its plans to set up an office for the Ministry of Housing, Communities, and Local Government in Wolverhampton. This is fantastic news for our city, and I would like to thank Robert Jenrick for believing in this vision for our great city. This move will bring hundreds of jobs to our city at a time when we have ambitious plans to level up our whole community. I will continue to lobby for more investment and make sure everyone is included in our economic recovery plan.”

Communities Secretary Robert Jenrick said: “As Communities Secretary, I am determined to spread opportunity and prosperity to every part of our nation. That is why I am delighted to be taking the historic step of moving significant numbers of senior roles out of Whitehall and creating the first ever ministerial office outside of Westminster in Wolverhampton – increasing the jobs in the Midlands to over 500. With a dual headquarters in Wolverhampton my department will not only change where we work but how we work, signalling the end of the Whitehall knows best approach.

All of us at the department are looking forward to having the opportunity to work there. This Government knows that by having more local voices at the heart of our policy development and delivery, we will support our communities more effectively, and we will continue to develop greater career options in Government outside of London. In choosing the city of Wolverhampton we are also backing our great smaller cities, some of which have been neglected for too long. We want to raise their stature, encourage civic pride and commercial success.”

At the Budget on the 3rd of March 2021, the Chancellor confirmed that the Ministry of Housing, Communities and Local Government (MHCLG) will establish a Modern Methods of Construction (MMC) Taskforce, backed by
£10 million of seed funding, to accelerate the delivery of MMC homes in the UK. The Taskforce will consist of world-leading experts from across government and industry to fast-track the adoption of modern methods of construction. It will be headquartered in MHCLG’s new office in Wolverhampton. The Taskforce will work closely with local authorities and Mayoral Combined Authorities, including the West Midlands Combined Authority.