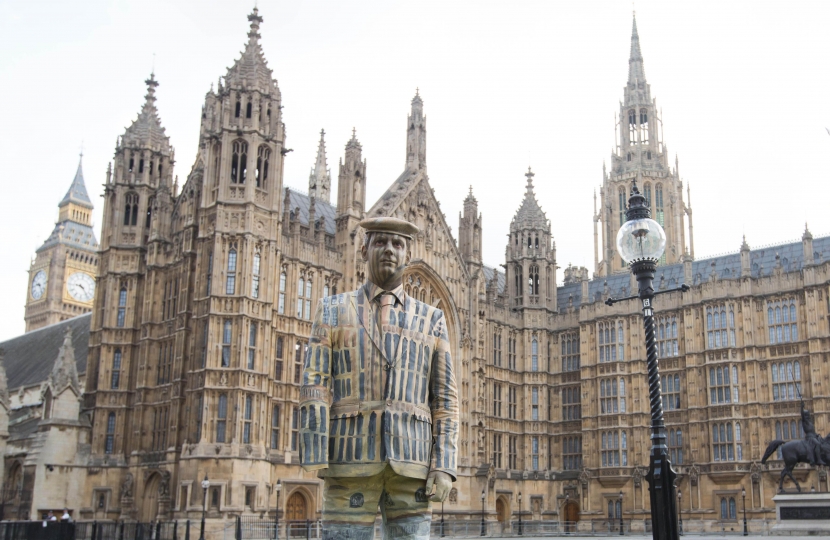 Image: Darren Fuller, 39–Pictured at the Houses of Parliament, London

Darren, from Colchester, served 20 years in the Army, in 2nd Battalion The Parachute Regiment. During this time he completed tours to Northern Ireland, Macedonia, Iraq and Afghanistan. Darren was injured in Afghanistan in April 2008, losing his lower right arm, and was medically discharged in 2014. After receiving great support from The Royal British Legion, he now works for the organisation as the Community Fundraiser for Essex. Darren was painted into his surroundings at the Houses of Parliament in London, demonstrating that the Armed Forces community is currently invisible on the UK Census.

For the first time in the history of the Census, there will be a question on service in the Armed Forces following a campaign led by The Royal British Legion and Poppyscotland.

Stuart Anderson MP is delighted that the Government has announced that the 2021 Census will now include a question to provide information on whether someone has served in HM Armed Forces.

The Royal British Legion, which led the campaign, is at the heart of a national network offering a range of support and services to the Armed Forces community. The decision to include the question on the 2021 census will provide the Legion, as well as public bodies, local authorities, and other military charities with valuable information to ensure they can best meet the needs of serving personnel, veterans and their families.

It has been estimated that there are 2.4 million veterans currently living in Great Britain, who make up part of a wider ex-Service community which includes their spouses, partners, dependent children and widow(er)s. However, little is currently known about the exact numbers, location and needs of this significant group. Including an Armed Forces question in the next census would provide public bodies, local authorities, and charities with valuable information to ensure they are able to deliver the best services they can for our Armed Forces community.

Stuart Anderson MP said: “Having a better understanding of the profile and needs of veterans is a key part of making sure that our public services are tailored for our armed forces community. I welcome this historic change to the 2021 Census to include a question on the Armed Forces.”

Charles Byrne, Director-General of The Royal British Legion, said: “This is an extremely proud moment for the Legion. After leading a successful campaign, the fact that a military question will be in the 2021 Census will significantly improve our understanding of the Armed Forces community which up until now has been very limited.  It will ensure that we, along with other charities and service providers, can deliver the best service possible to them when and where it is needed most.

“This is something we have been striving towards for many years, it will have a huge impact on service personnel, veterans and their families well into the future, as the outcome will allow us to provide more effective care and support to those who are in need. We are delighted and are extremely grateful to everyone who has supported the campaign and helped us to achieve this historical success”

Constituents can find out more about the  campaign by visiting the campaign website, www.rbl.org.uk/campaigns, or by posting their own pledge of support on social media using the #CountThemIn hashtag.

‘Count Them In’ is part of The Royal British Legion’s ongoing campaign work to help champion the interests, welfare, and contributions of the Armed Forces Community.

As someone who has been affected by poor mental health, I know how much of a difference having a positive support network can make. My office and I are always happy to help answer your queries and signpost you to any relevant organisations.