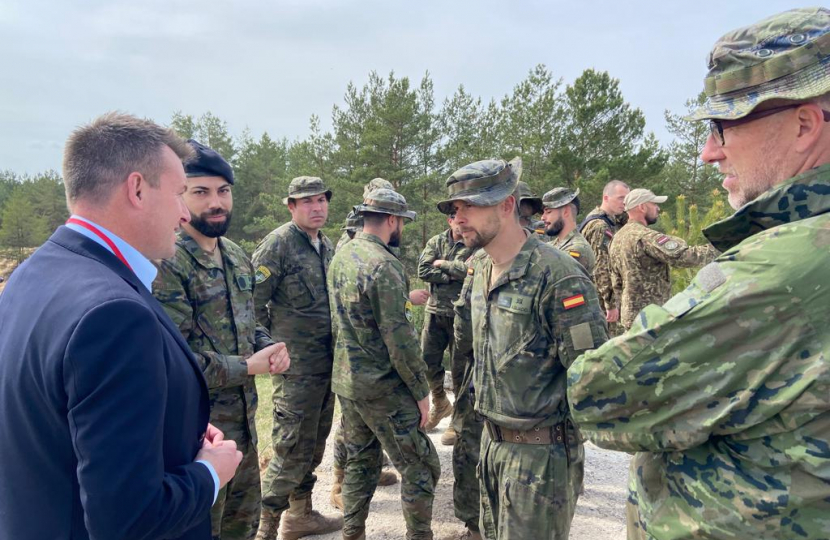 In Latvia, Stuart met with Deputy Prime Minister Artis Pabriks and representatives from nine nations that constitute the NATO enhanced Forward Presence Battlegroup; Denmark, Estonia, Finland, Latvia, Lithuania, Norway, Sweden, and the Netherlands. It is one of four defensive, multi-national NATO coalitions in the Baltic states and Poland to deter aggression and promote peace. The UK Government recently doubled the number of personnel in Estonia, where the British Army leads NATO's battlegroup, and has deployed extra Royal Navy ships, British Army troops, and Royal Air force fighters to Eastern Europe.

Last week, the Prime Minister signed a new declaration on his visit to Sweden and Finland to tackle traditional, hybrid and cyber threats, marking a new era in security cooperation and intelligence sharing as we bolster military ties and global stability. NATO’s response remains preventive, proportionate, and non-escalatory.

Stuart also welcomed a new package of sanctions on Russia and Belarus targeting £1.7 billion worth of trade, including platinum and palladium. It brings the total to more than £4 billion, further hampering Putin’s ability to fund his war effort. The planned export bans intend to hit more than £250 million worth of goods in sectors of the Russian economy most dependent on UK goods, targeting key materials such as chemicals, plastics, rubber, and machinery. This is the third wave of trade sanctions announced.

Stuart Anderson MP said: “As a veteran, it was an honour to meet representatives from the enhanced Forward Presence in Latvia and see the outstanding work our troops are undertaking with NATO allies in eastern Europe to deter further Russian aggression from threatening the territorial sovereignty of member states. We stand shoulder-to-shoulder with our allies to ensure Ukraine can best defend itself from Putin’s regime and choose its destiny.”