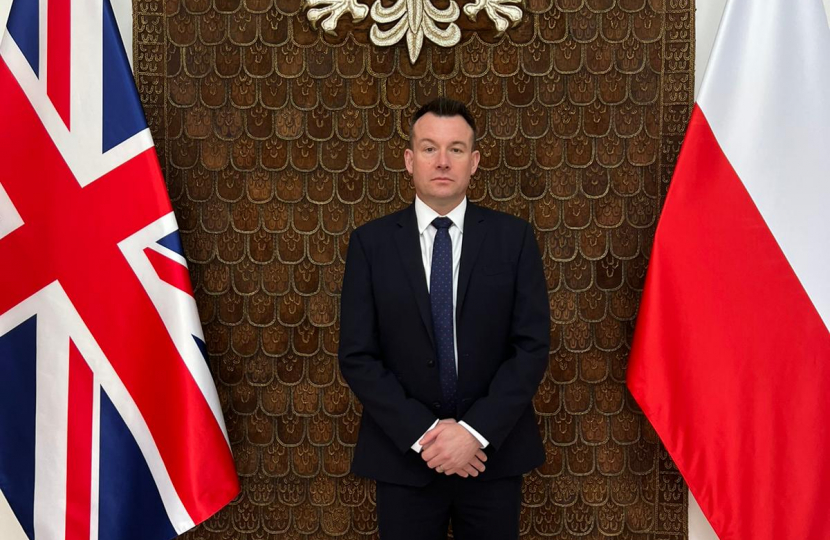 Stuart Anderson MP has visited two countries on the frontline of providing military and humanitarian assistance to Ukraine following Putin’s barbaric assault on the country. The UK was the first country to provide military aid to Ukraine and is the largest European bilateral humanitarian donor. The Defence Select Committee, of which Stuart is a member, has now become the first such group from any NATO country to visit Poland since the invasion began. He met with the Polish National Defence Committee to reiterate the UK’s strong support for Ukrainian citizens and those helping in neighbouring countries.

The Defence Committee recently held oral evidence sessions on the Russia-Ukraine Crisis. They have now met with counterparts in two European countries to discuss UK support to Ukraine and what further support could be provided to boost their capabilities. The delegation took place between the 28th and 31st of March 2022. In Poland, they met with the Deputy Minister of Defence, Marcin Ociepa, to speak about cooperation in NATO. The Minister thanked Britain for its support, having stationed troops in Poland since 2017 as part of NATO's enhanced Forward Presence. The UK has also supported Ukraine since 2015 through Operation ORBITAL, which has trained around 22,000 Ukrainian troops. In addition, Stuart met British troops and looked at their work on the frontline of the response. During the visit, the Government sent a 13th flight carrying ventilators and other medical supplies to Poland, from where they are being transported to sites across Ukraine. The UK has now donated more than 5 million medical items to Ukraine including lifesaving medicines, wound packs, and intensive care equipment.

The Committee also visited Germany, where they welcomed the country’s recent commitment to raise defence spending to over 2% of output - in line with the NATO agreed minimum. Discussions were held on how support could be bolstered for NATO as Germany works towards this target. In Germany, the Committee also witnessed humanitarian support provided in cities such as Berlin to safeguard and protect vulnerable Ukrainians. It comes as the UN Refugee Agency report that 4 million people have fled their home in Ukraine since the conflict began, with millions more displaced within the country.

Stuart Anderson MP said: “We are fully committed to supporting Ukraine in defence of its nation as well as countries at the frontline of humanitarian efforts, including Germany and Poland. We must do everything that we can to ensure that Ukraine is not only helped to defend itself, but so that it can emerge from this crisis as a strong country with the ability to choose its own destiny.

As the first group of parliamentarians from any NATO country to visit Poland since the invasion of Ukraine began, we have seen first-hand the life-saving support being provided to vulnerable Ukrainians. This was a humbling and emotional experience, which underscored the importance of working together to put an end to Putin’s brutal regime - making sure he ends up on trial for war crimes. We welcome the Government’s increased support for NATO partners on the frontline of the response in mainland Europe, and are grateful to our partners such as Germany and Poland for their work in ensuring that this assistance reaches those in need.”